Mourad Sliti aka Dj Mourad is a producer and dj from Tunisia, based in Sweden, he started  djing  since mid80s.

Now he is coming back with a really  mature and high quality  EP under the title Tacotac, another work that is reflecting his broad knowledge and experience in music. An EP released on Minimal Soul Records, a strictly vinyl label.

Straight after listening that record I contacted him without second thought as he is one of the artists we really appreciate always coming up with a surprise.

Tacotac it has all the characteristics of what we consider timeless “diamond” with its deep, dynamic tunes and hardware sound, leaving us with a wonderful taste and a strong will to listen this music on the dance floor with proper sound system. The tunes either as a part of a concept or  as separate dynamic cuts are more than eclectic. 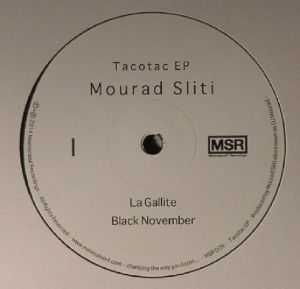 Mourad has played with legendary  artists and djs , as Larry Heard, Derrick May, Juan Atkins and Alexi Delano, to name few. He has made a lot of remixes as  and numerous releases on labels such as Selekta recordings and Soul People Music. His influences from different kinds are obvious in almost each work of his.. hip hop, soul, jazz, detroit techno and house.. is all there in a great harmonic combination.

We are more than happy to get an interview from such a good artist, especially after reading all these incredible details about his musical experience and his philosophy about music with a quite spiritual way and depth.  We prefer to pass the word to him and let you enjoy  this  rich and marvellous interview.

1. We need to express our sincere admiration to your work and to yourself, Mourad. You are deeply devoted to vinyl and to deep stuff, as we know from your productions and records. Tell us few things about how this story started. You are from Tunisia, how did you decide to move to Sweden? Which would be the most important moments for you during your career as producer and dj?

Thank you for your kind words, Vilma. It is my honor to have engaged such breadth of electronic music history. Moving to Sweden in 1991, after DJing in Tunisia for several years, allowed me to be on the front lines of the European electronic music scene. This coincided with the relationship with my son’s mother, who is Swedish.

The creative pace was fast and filled with an equal balance of rich creativity and crazy adventures. During that time, I met the two people that fueled my drive and passion, and remain as two of the most important people in my life, Christian Lappaleinen and Manuel Perez.

Chris is my soul brother and collaborator on the Chrismour Project. Then enter Manuel who became my son’s godfather. Those two are family to each other and both are brilliant DJs and producers.

As founding as Chris and Manuel have been in my journey, my story would be incomplete without mentioning Aaron Carl (d. 2010), who had been one of my closest mentors since 1995. It is with sacred respect I mention him here, but to continue would require a full interview to explain the artist and friend he was, and the family that was created in his wake. We knew each other’s truths, we knew each other’s dreams, and in his death, I knew who his true friends were. There were many tragedies in that tale, but more importantly, many lives that will forever be blessed and changed by the influence he had.

2. To be honest what made us reach you out was your new EP, Tacotac as we were impressed, needless to say is a brilliant work. How do you feel about it?  Can you share any special inspiration, moment regarding that? What does Tacotac mean?

What I feel about Tacotac ep is what I felt about all my releases, “It is done, let´s move to the next one”. For me, any record becomes part of the past as soon as contracts are signed. Once that is done, it doesn´t belong to me anymore as it becomes public and it´s gone to have a life of its own. It still surprises me how fresh and new the sound is to everyone that hears it, when I have been past connecting with it months, and sometimes years, prior to the release. It is a great reminder that each of our experiences is unique, valid, and happening in the right time for the individual. We are all on a different path.

As you noticed, there is a track with Aaron Carl on Tacotac. The proceeds will go to his widowed partner, Mel, who found the acapella track on AC’s computer after death. We believe it was initially recorded on his smart phone. When Mel asked me to work with the track, it was very difficult to hear AC’s voice. It was the first time I had heard anything from him, voice or music, since he had passed. It was all still too raw to emotionally digest. Working on that track was heavy, and very emotional, but also incredibly cathartic. After receiving Mel’s blessing on the track, we had to sit on it due to the heavy glut of illegal edits and remixes of AC’s work that were still being released. It’s hard to wonder why people abuse an already-tragic situation. In my opinion, loss is the one experience all humankind will assuredly share. A man that takes advantage of another’s loss is a man with no compassion.

Tacotac is French for “tac au tac” which means very fast or u can also say “tit for tat”.

*And no, I’m not talking about titties it is tit for tat. (A private joke between AC, Jason Jones, and myself. Move along. Nothing to see here.)

4. Where can we see you spinning your records? Where is the best crowd for you? Where do you enjoy playing most?

You can find me spinning all over the world. Currently, I´m getting ready to head over to Toronto, Canada. The best crowd is definitely Japan but a second runner up would be all my gigs in Singapore. There is a little underground scene that can rival with any other scene here in Europe. Big shout out to my boys Brendon Pereira and Michael Chen.

5. How do you find the scene in Sweden?

Sweden is a unique place. We produce a lot of high-quality music, but other than a couple of places in Stockholm, the rest of the country is sleeping. There used to be a great scene and plenty of parties every weekend, and then suddenly, nothing. Of course, that didn´t stop us from being productive and offering the world our version of house and techno. In fact, it gave us more time to focus.

6. Taking into consideration your experience over time. How do you see the techno- house scene nowadays? Do you feel is anything missing?

The evolving culture of electronic music is bizarre. How can anyone explain quality that is measured with how many followers you have on SoundCloud or how many fans you have on facebook? When these are the criteria that promoters and clubbers use, rather than prioritizing the quality of their participant’s experience, I feel that I´ve stepped into the twilight zone.

There is no explanation for some PR-machined hotshot getting a year of bookings after only a month of DJing while genuinely talented and experienced individuals continue to sit on the sidelines watching this tasteless display. It shows no respect for the audience. It is the audience that spends their hard-earned money, and they deserve better. A dear friend of mine has a saying, “Your audience is only as smart or dumb as you tell them to be, and no one wants to be called a fucking idiot.” These continued grievances to our community and congregations are an insult, and a strong reason why I am happy where I am.

7. For the end, our special question. What record would you choose as the ideal tale of psychofonia.. the best therapy for a hard migraine either physical or mental..?

That is a difficult one but there is one I never stopped listening to for years, and I’m far from stopping, in the   near future.

Thank you so much Mourad for this sharing!

Vilma for Tales of Psychofonia